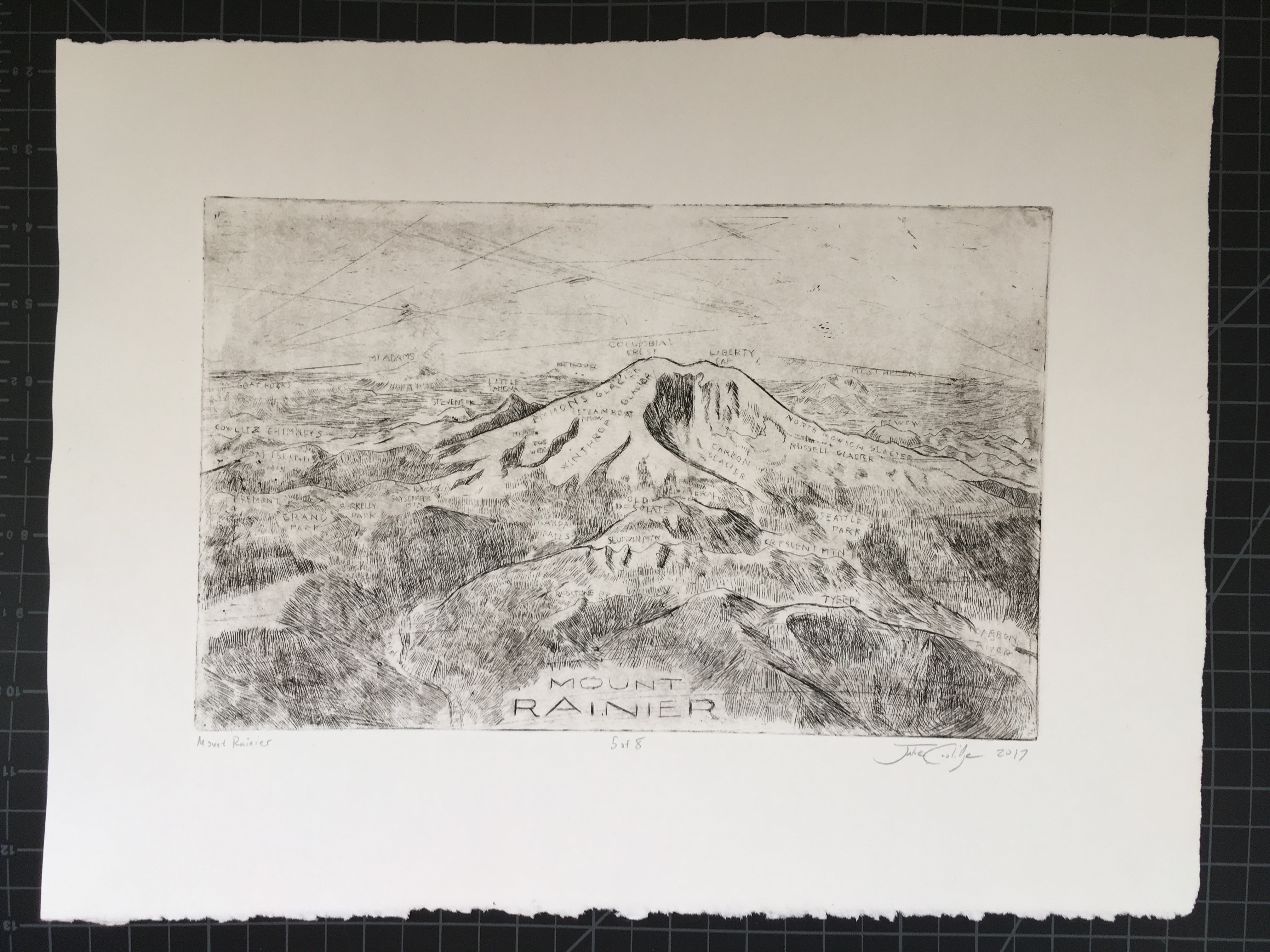 Ever since I started drawing maps by hand a few years ago, I've wanted to incorporate my background in fine art printmaking into the process—to bridge my current work in cartography with printmaking, allowing the print medium to enter into the map-making conversation. A major impediment in years past has been time, but more importantly, having access to a printmaking facility. In conversations with my good friend and printmaker, Brian Lane, we devised a plan for me to work at his shop in Seattle, Print Zero Studios, over a condensed four-day period in July, 2017. I set my sights on exhibiting the finished product in the Map Gallery at the NACIS Annual Meeting in Montréal, and used that to spur me in to action.

Fittingly for a project to be executed in Seattle, I chose an aerial view of Mount Rainier, the brooding stratovolcano that rises over 14,000 feet above the surrounding countryside just sixty miles southeast of the University of Washington campus, where I learned printmaking under the guidance of Shirley Scheier, Curt Labitzke, and Larry Sommers. The drawing technique I exhibit in my hand-drawn maps has retained characteristics informed by traditional printmaking techniques, particularly the linework and hatchuring common in zinc and copper plate etching, and this led me to choose this technique over others, like woodblock and silkscreen. Compared to my past hand-drawn maps, which can be as large as the table surface I have access to, delving into copper plate etching after a long hiatus from the process would require the development of a much smaller composition. I felt a portrait of a mountain would fit these constraints nicely. Earlier in 2017 fellow NPS cartographers gifted me with an impressive collection of Heinrich Berann posters, and his masterful depiction of Denali served as a major inspiration.

Below I've included some documentation of the process. I went from concept to finished print in less than three months, an extraordinary turnaround when compared to the two and half years of off and on effort that went into the California map. I consider this print more of an experiment, dipping my toe in the realm of making maps with traditional printing techniques. If I get the opportunity to return to this medium in the future, I'll want to refine my lettering (writing small letters backwards with a twisted scribe on a copper plate coated in hard ground is as difficult as it sounds), etching and stop-out techiques, ink preparation and consistency, and perhaps even add aquatint for tonal effects. 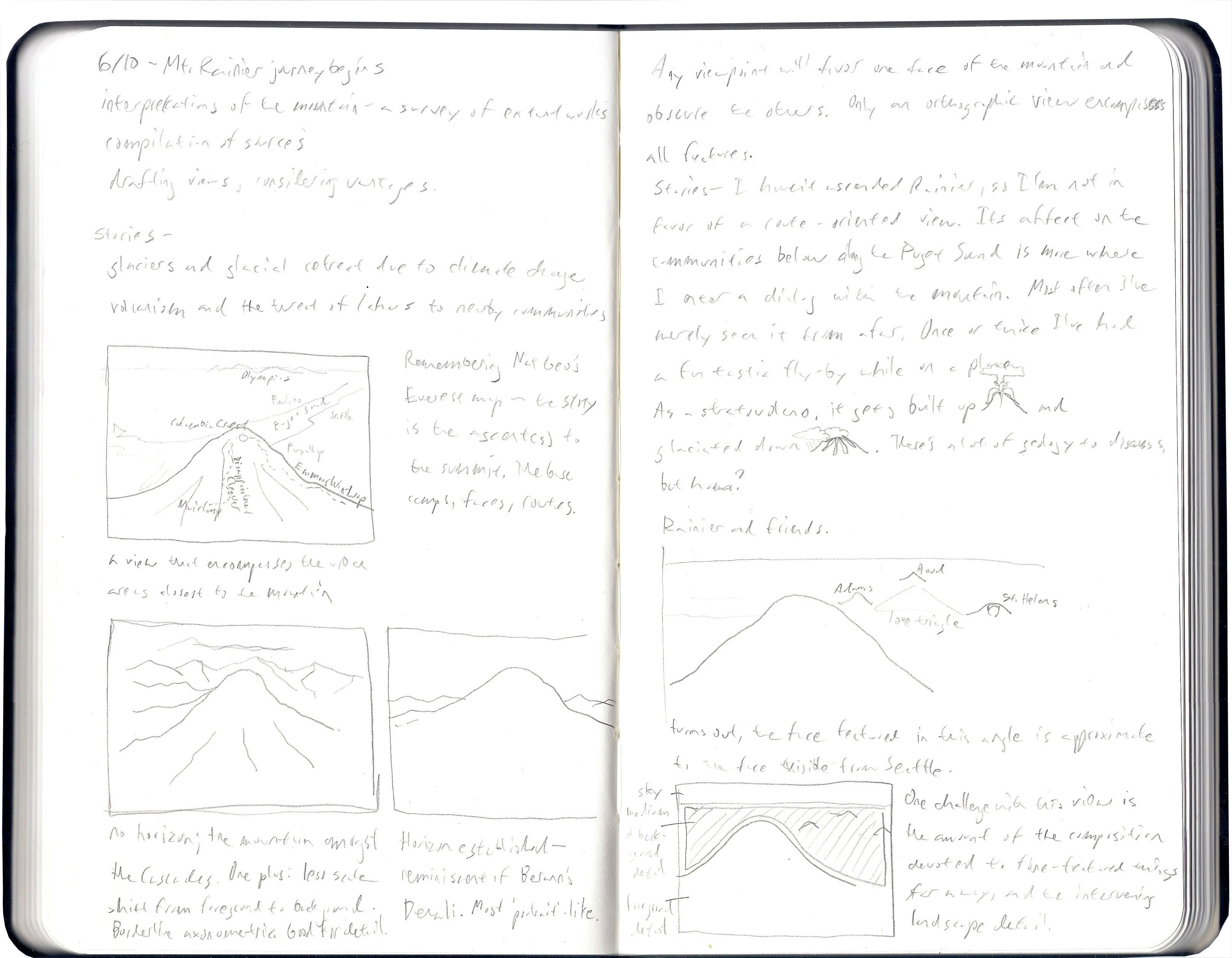 I started sketching ideas in my notebook for framing the mountain in a composition. I chose a vantage that encompasses some of Rainier’s interesting features, and contextualizes the mountains with some of its peers in the Cascade Range: Mt. Adams, Mt. Hood, and Mt. St. Helens, which suffered a massive eruption in 1980. 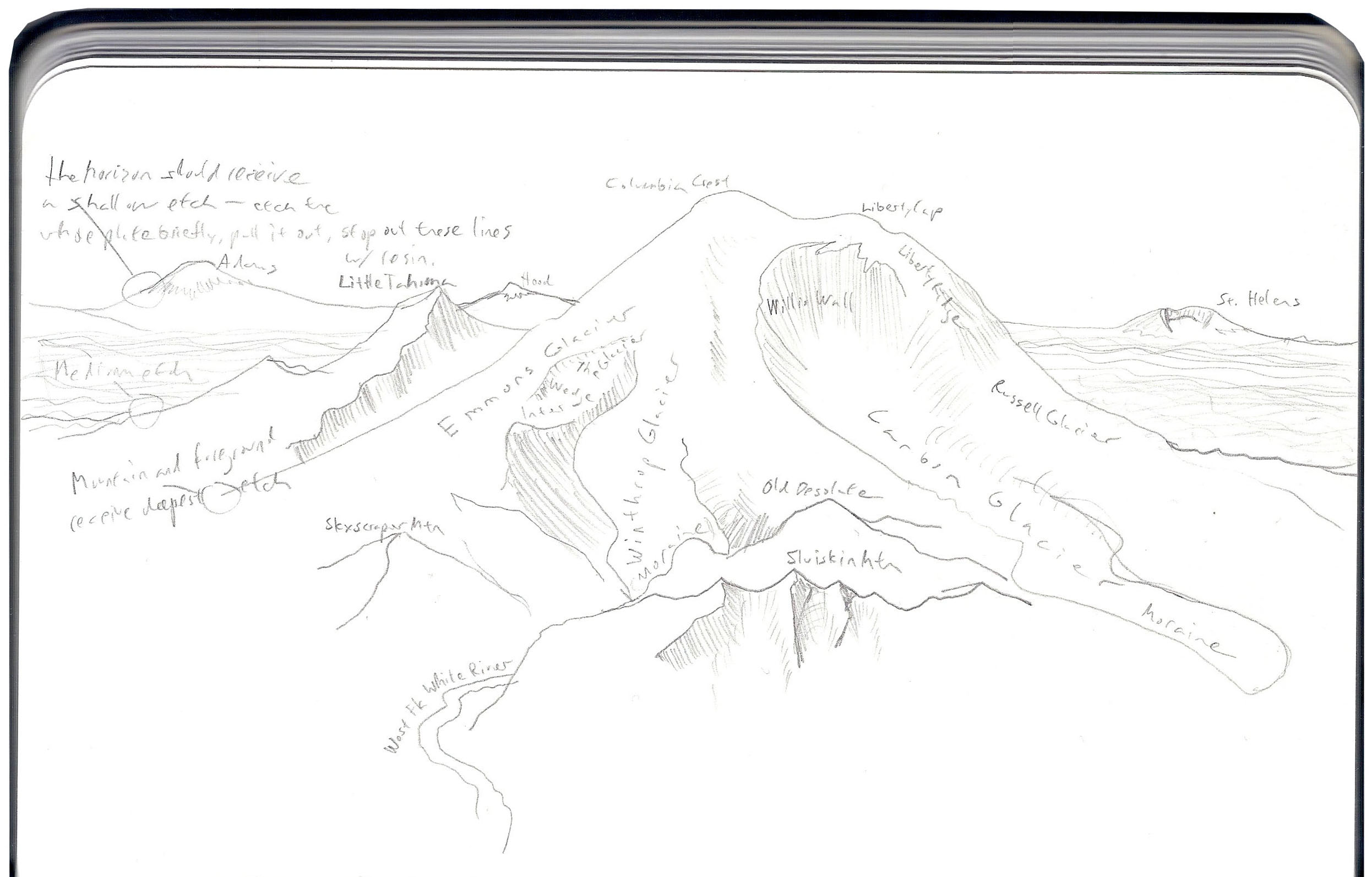 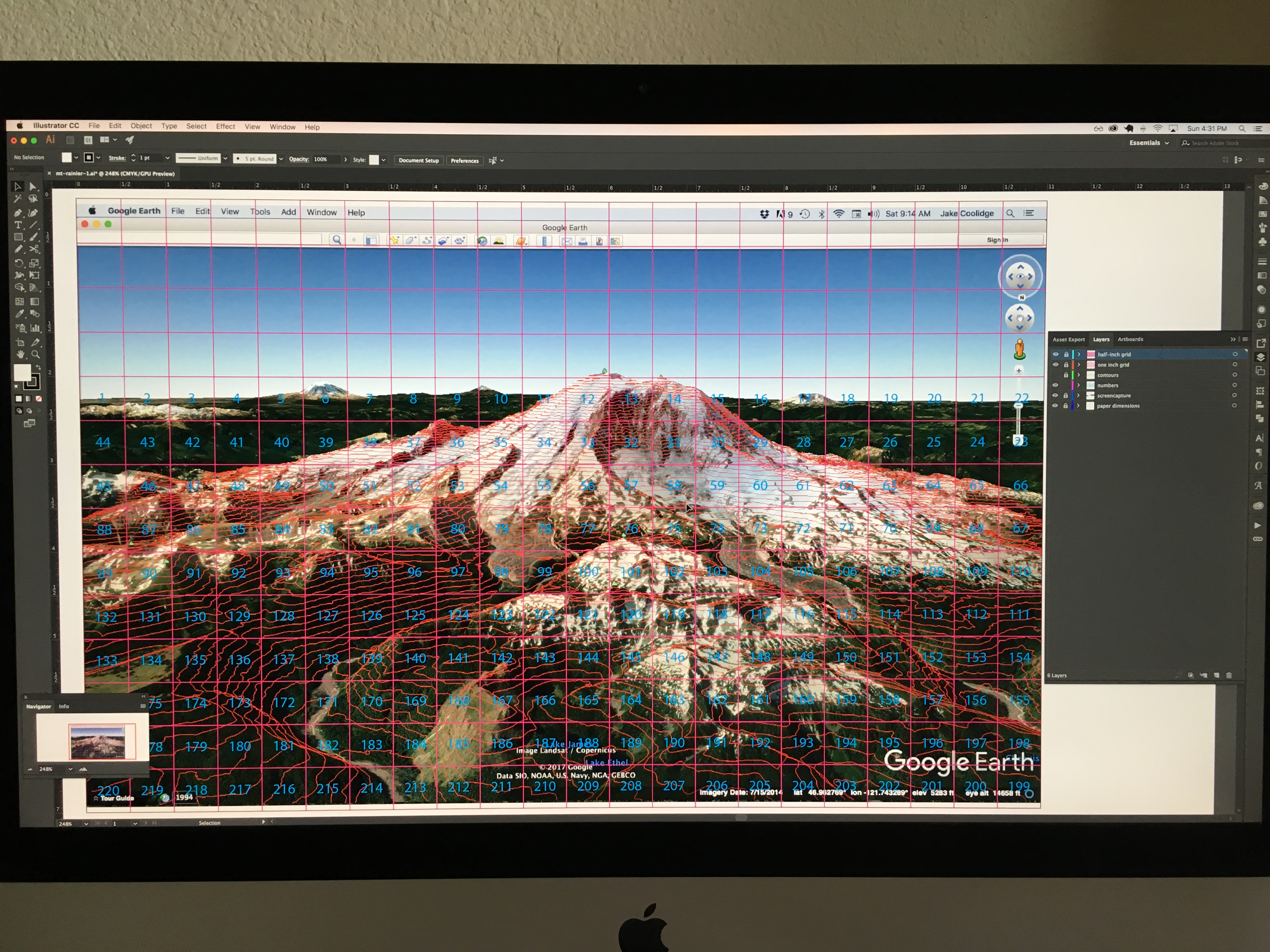 I extracted contour lines from USGS 1:24k topographic quads and added this data to Google Earth. With contour data draped over imagery, I overlaid a grid in Illustrator. Using the grid (the method-of-squares technique), I experimented with a hatchure-based relief depiction demonstrated in Imhof’s Cartographic Relief Presentation. This preparatory work happened in Colorado during May and June, prior to heading out Seattle. 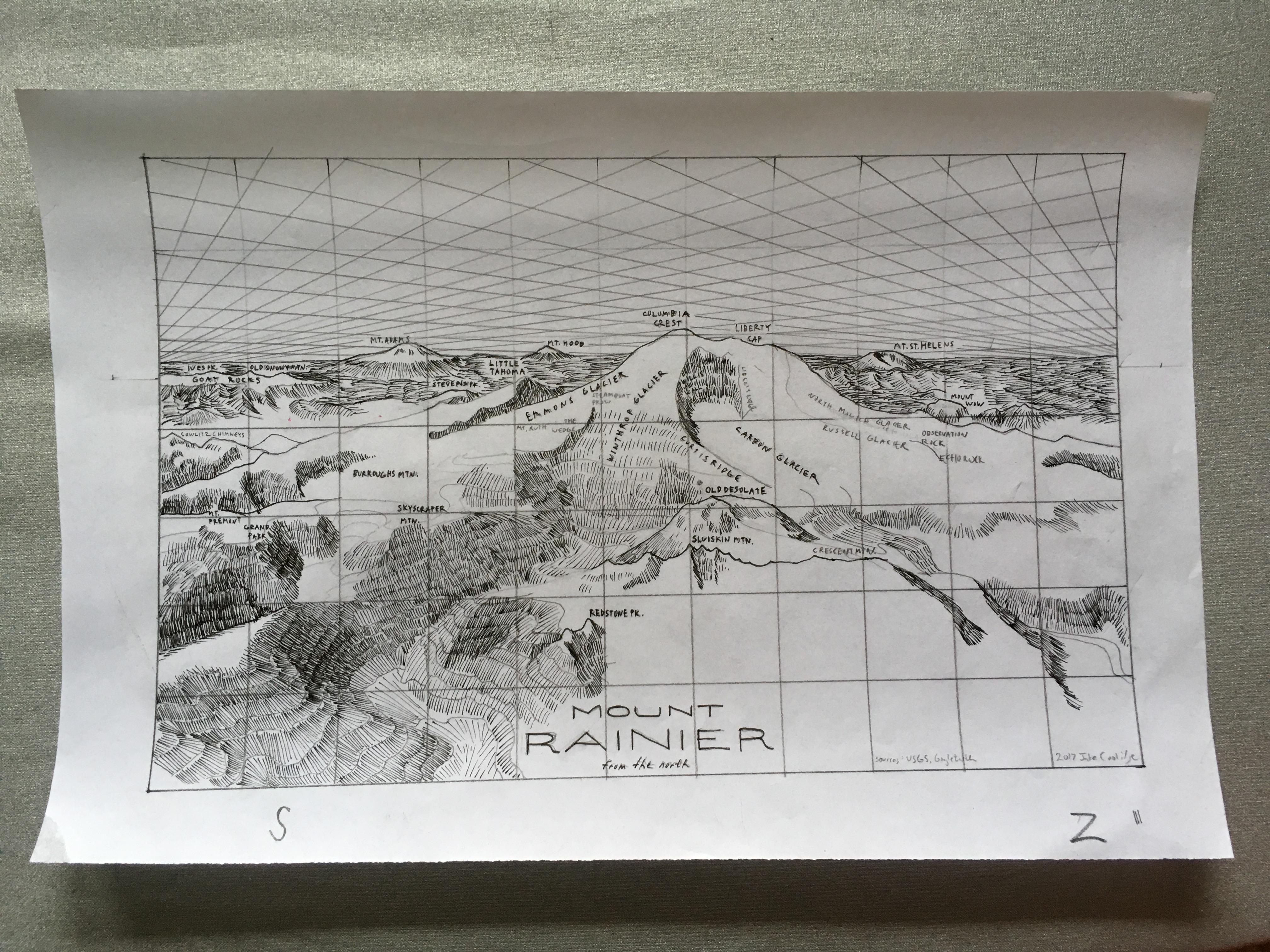 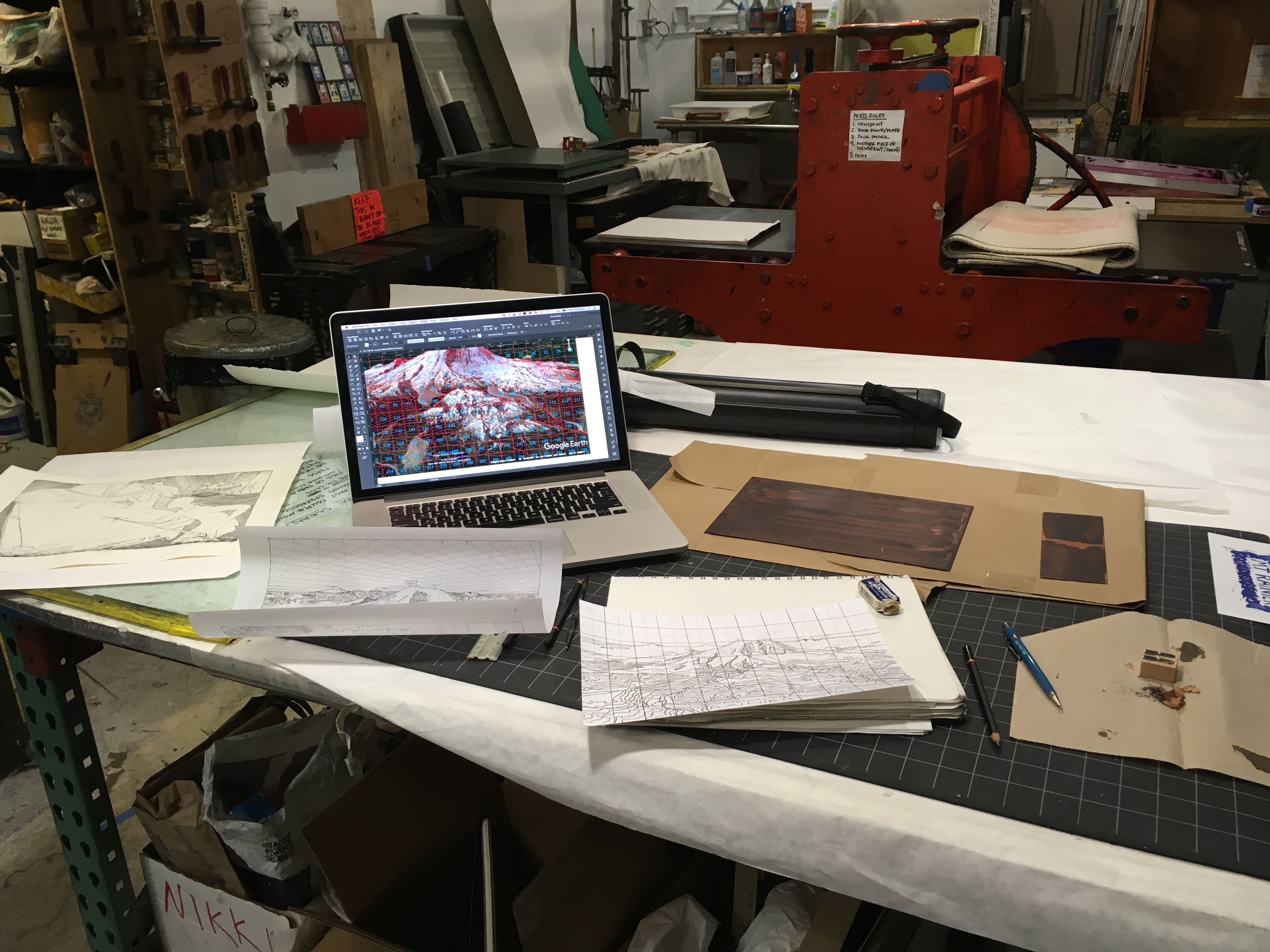 The image above depicts an early scene at Print Zero Studios, Seattle. I’ve applied a hard ground to the copper plate and am preparing to transfer a pencil sketch outline of the map to the plate. 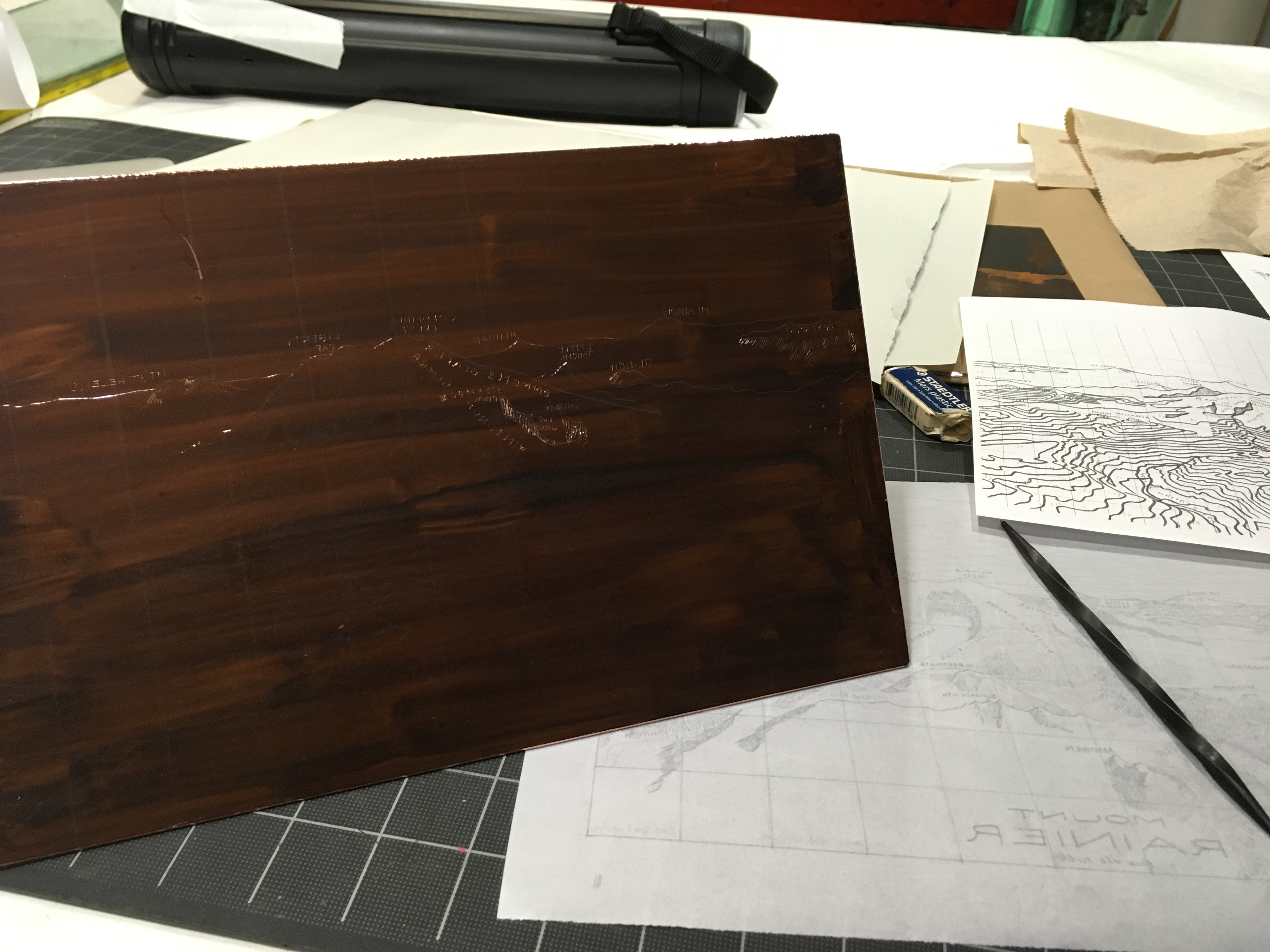 With graphite from the sketch transferred to the plate surface, I use a twisted scribe to scratch the drawing into the hard ground with fine lines. This exposes the plate to etching by acid. Later, the etched lines can hold ink below the surface of the plate. 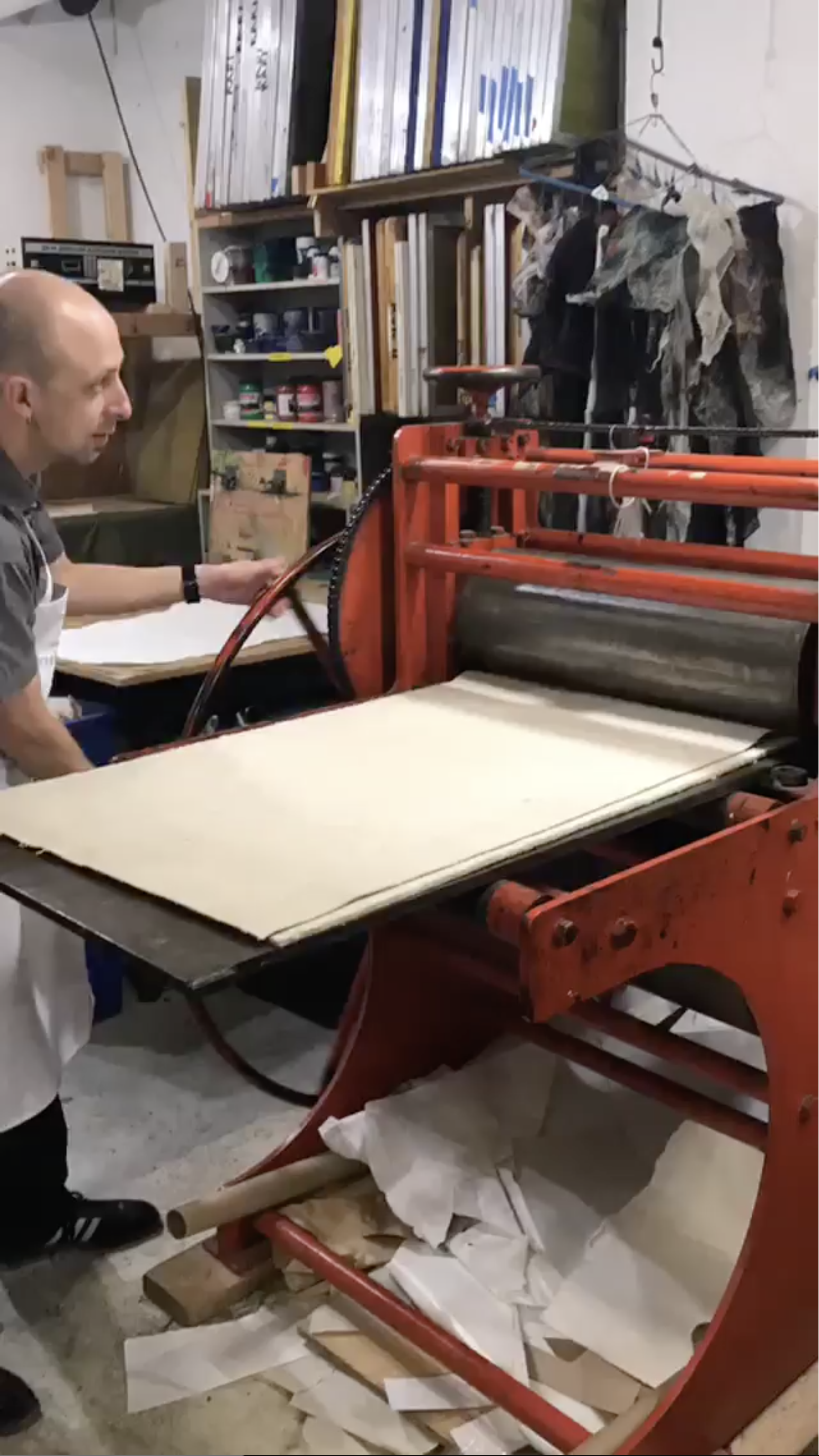 Click images above to view series; photographs by Nikki Barber. Having etched the plate, removed the hard ground, and applied ink, I run the first proof through the press. The first proof was pretty light, so I reapplied hard ground and did some more drawing on the plate. I also modified the ink consistency for better results in future proofs—my thanks to Nikki Barber for her key assistance in helping me get the ink to be more workable. 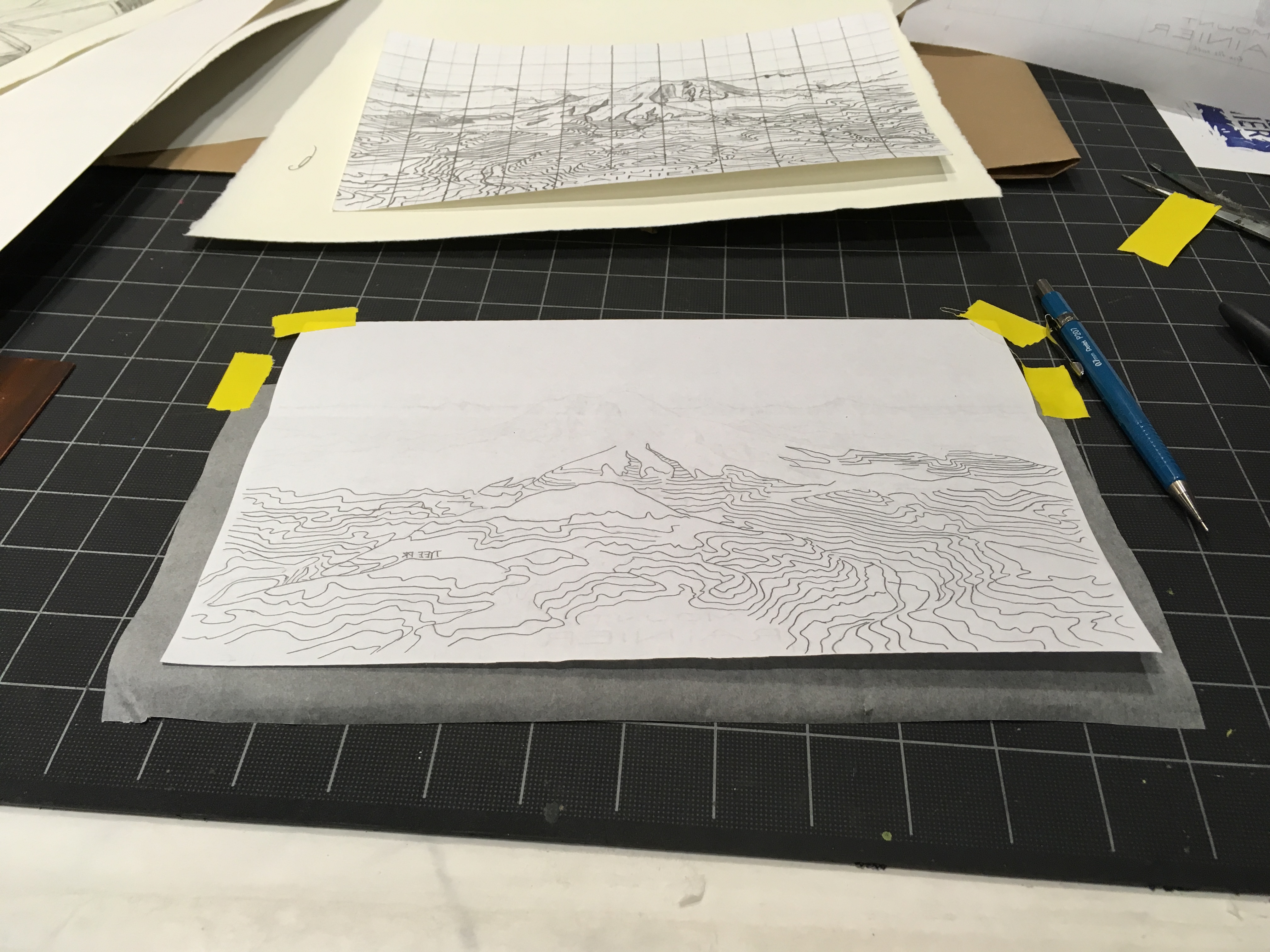 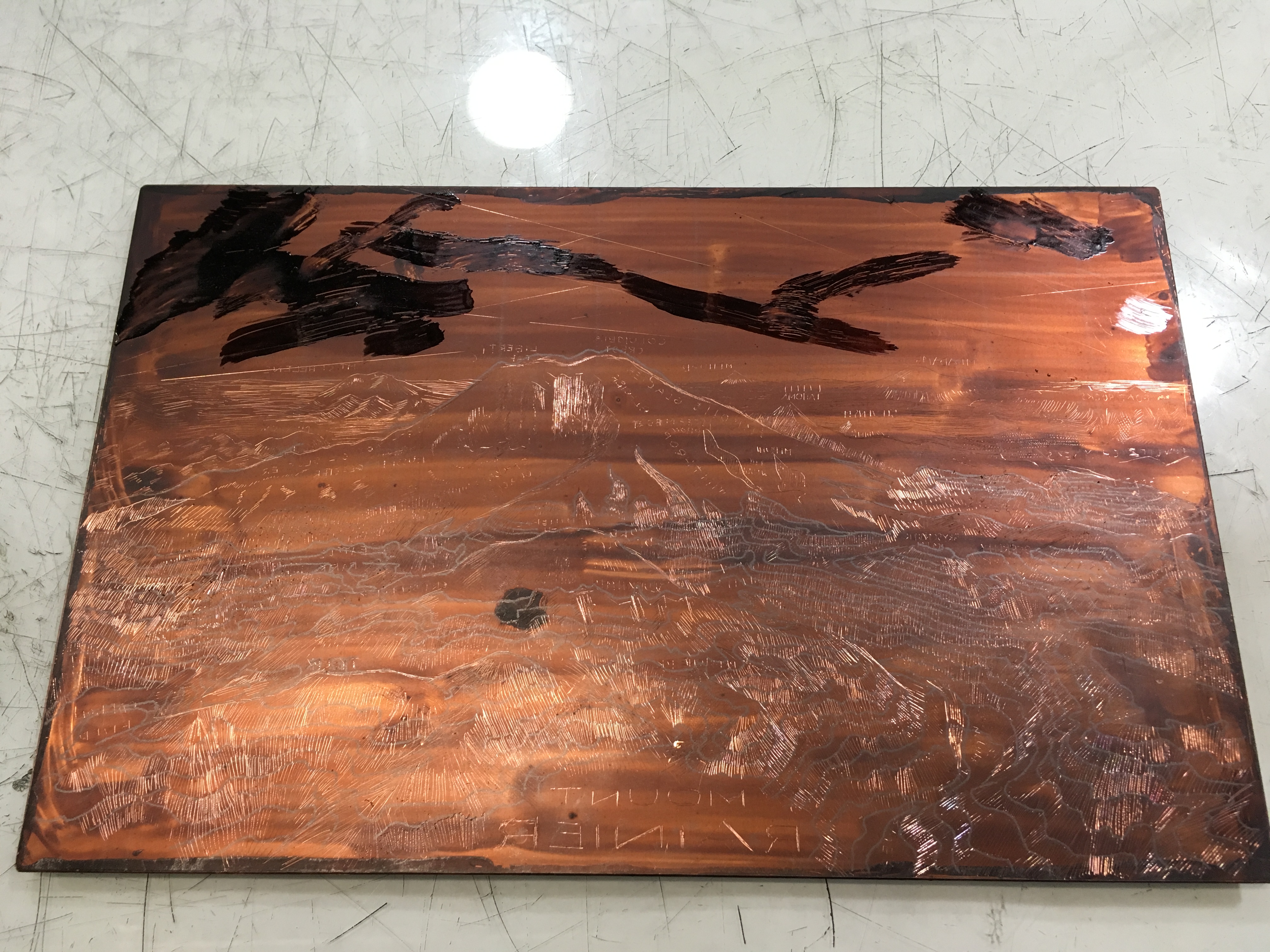 Second round of etching, using stop-out to create a range of etch depths from shallow, faint lines in the background to deeper, richer lines in the foreground. 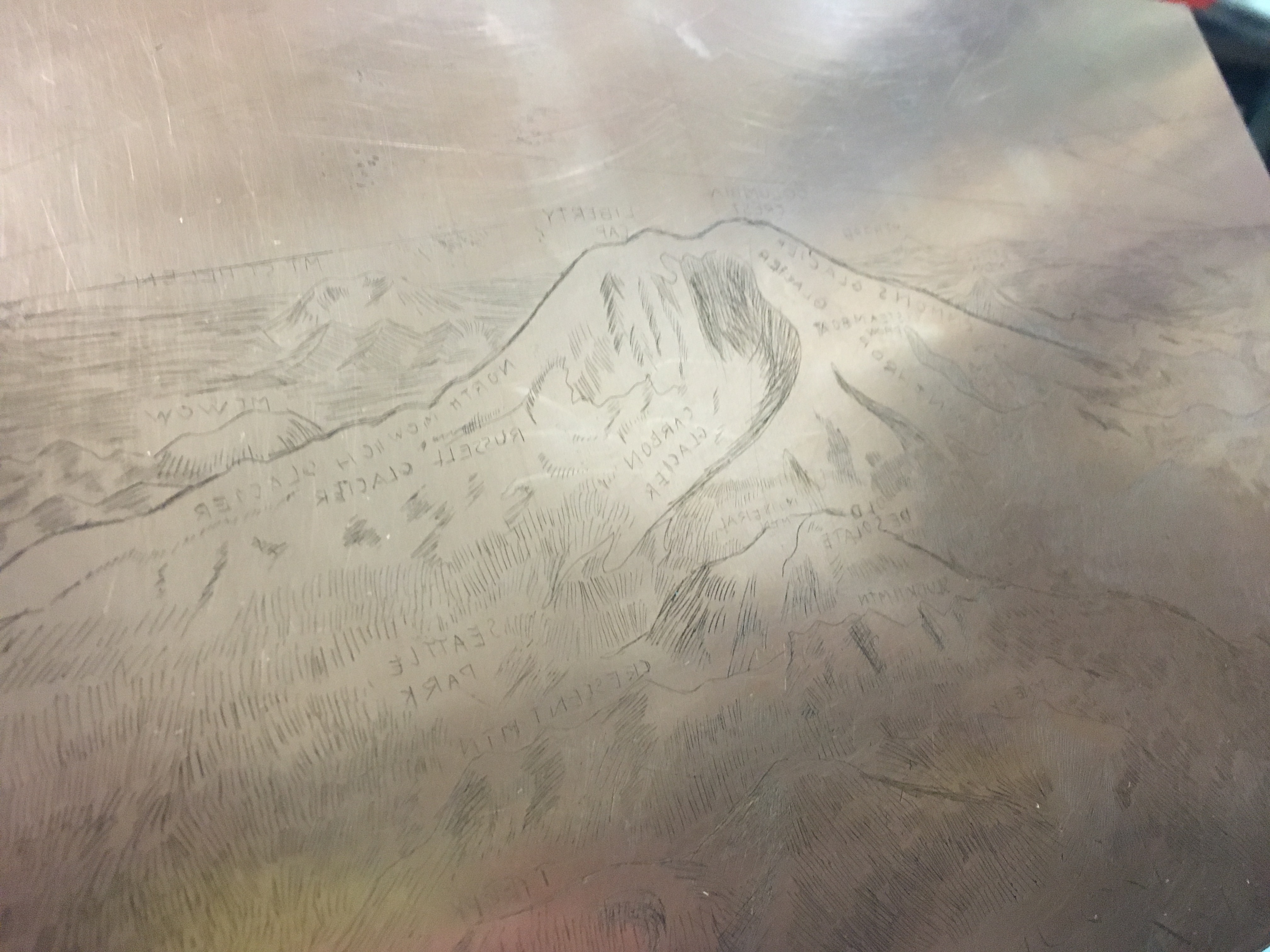 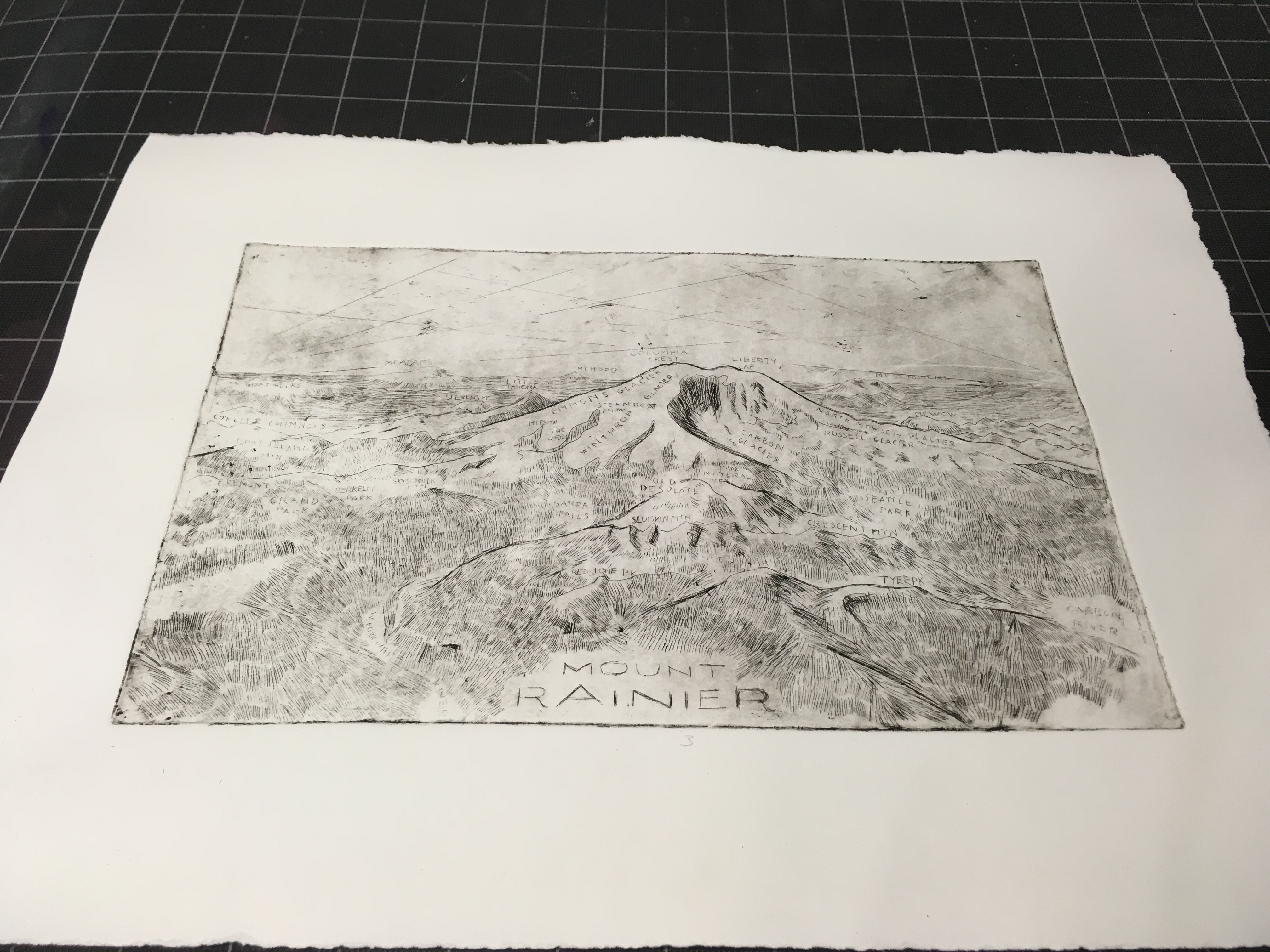 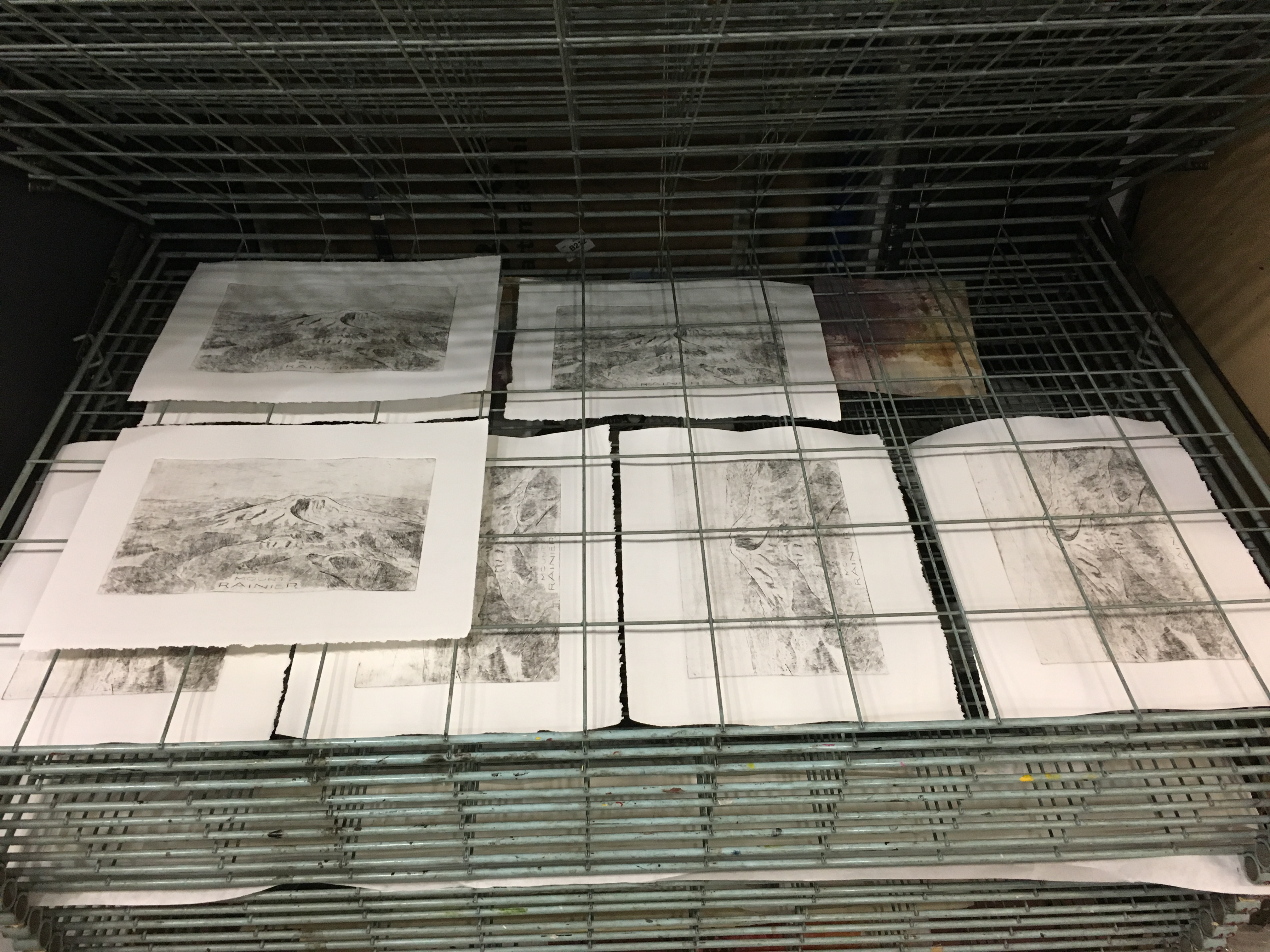 Small edition of eight prints completed and drying on the rack.