This is my third major hand-drawn map. While clearly related to my earlier hand-drawn maps of California (2012) and the Columbia River Watershed (2014), this map makes a few notable departures.

In beginning to compile this map, it quickly became clear to me that the landscape would require a different sort of symbolization. Where terrain relief depiction had played such a central role in the earlier maps, this relatively flat part of the world would seem incomplete without the integration of additional information. An airline passenger might note from her window seat the great grid of the Chicago conurbation, and just outside it, the seemingly endless agricultural grid spread across the fertile plain. I opted to tell a story of this pattern of land use and land cover within the bounds of pencil and black ink on paper (new theme, same instruments). I acquired the National Land Cover Dataset from The National Atlas and once again consulted Erwin Raisz's General Cartography (1948) for ideas on how to proceed. The trees and croplands especially reflect this influence.

Highways make a return to this map after being excluded from the Columbia River Watershed map. Where they meet the edge of the map, I provide indicators of the major cities beyond the horizon and their distances from that point. A notable characteristic of the Chicago region, of course, is its centrality and interconnectedness with much of the nation.

As with all my hand-drawn maps, this map's perspective/projection is framed to reflect how I experienced the place, as a resident of Chicago who made a few trips into Wisconsin. This experience led me to think of eastern Wisconsin and northeastern Illinois as a part of a cohesive region, with the formidible Lake Michigan as a unifying element, always looming to the east with its moods and its power. Perhaps not surprisingly, the importance of the lake in the composition led me to create a rich texture for open water for the first time. (I merely alluded to a wave-like texture for the Pacific Ocean along the shoreline in my Columbia River Watershed map, and it is completely absent from the California map, since I was at a loss for how to approach the Pacific at that time.)

Unfortunately I never got around the lake to Michigan during my brief stay in Chicago, so in this map, “The Mitten” remains a mystery beyond the horizon. A seemingly ever-present wall of clouds along the indeterminate horizon punctuates the lake's mood—another flourish I permitted myself to employ as long as I kept it subtle.

This map was unveiled in the Tangible Maps Exhibit / Map Gallery at the 2015 NACIS meeting, at The Depot in Minneapolis, Minnesota. For more on the exhibit, see this. Below is the cover of Cartographic Perspectives no. 82, which features an excerpt of the map. 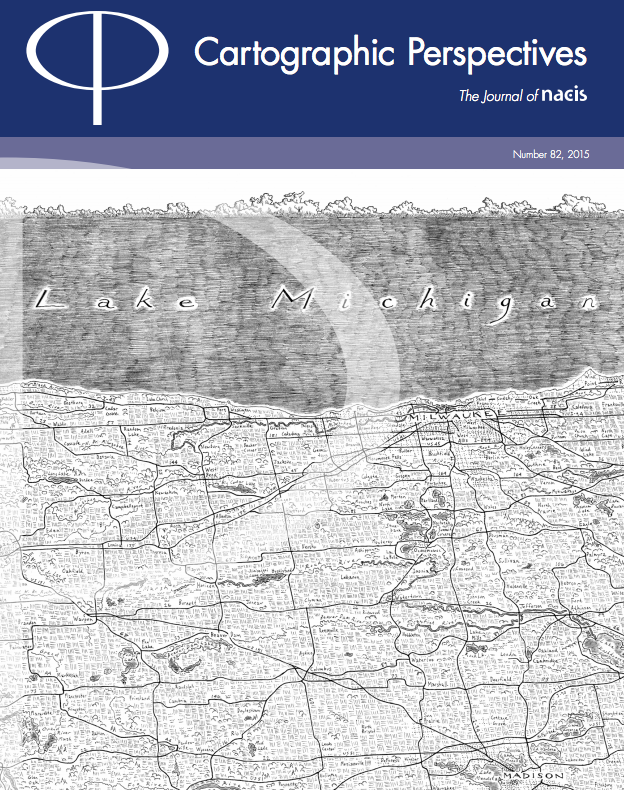